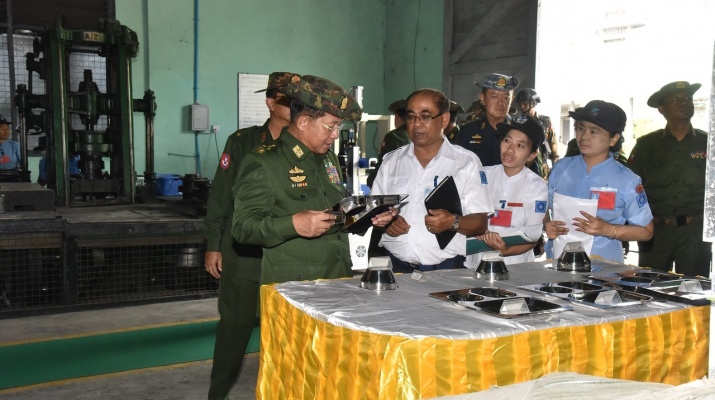 Factories must fulfil the domestic demand by running at full capacity. Quality products are required to acquire markets. As for the market competition, if the goods are of the same quality with others, they must be sold at prices lower than that of their counterparts and if the goods have the quality higher than others, they must be sold at the prices that are the same with their counterparts. A large number of factories were established for national development under the government program. Some of the factories were transferred to the Tatmadaw and it is running them, while some others were transferred to the private.The important thing is that all those factories should implement the original goal – to produce import-substitute goods and to fulfil the local demand. Moreover, it is required to prefer local products, to encourage local investment and to render cooperation, said Commander-in-Chief of Defence Services Senior General Min Aung Hlaing during his inspection of the Tatmadaw factories.

At the factory meeting hall, the factory manager presented a report on brief history of the factory, appointment of staffs, production of bandages, T-shirts, towels and cloths and staff welfare. In response, the Senior General said by exporting the products apart from selling them to the Tatmadaw, the country will be able to reduce imports and cut expenditure for them. Factories should run at full capacity and sell their products at reasonable prices.The factory should make arrangements to run at full capacity, manufacture guaranteed goods with new designs, fulfil local demand and conduct staff welfare.

Then, the Senior General was conducted round the display of goods including military-used garment, bandages, clothes,multi-colour T-shirts, towels and bed sheets by the factory manager. The Senior General and party observed the production process of the factory, and looked into the requirements of motorcar department, staff restaurant and staff welfare shop.

At the Defence Services Metal Factory(Okkyin), the Senior General heard a report on manufacturing of military utensils and personal goods presented by the factory manager. The Senior General spoke of the need to produce marketable personal goods for local use as way of reducing foreign exchange expenditure, to run at full capacity and to conduct welfare programs, and looked into the requirements. 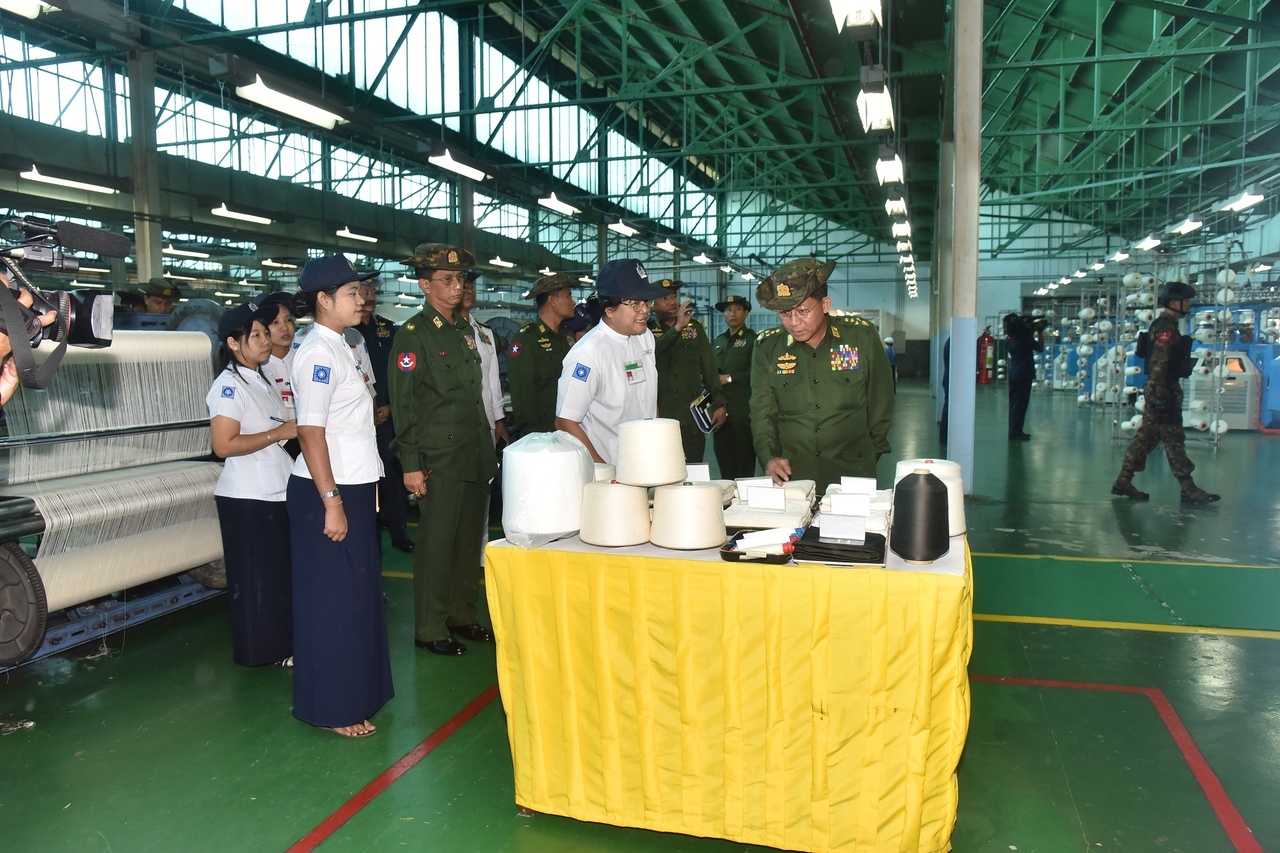 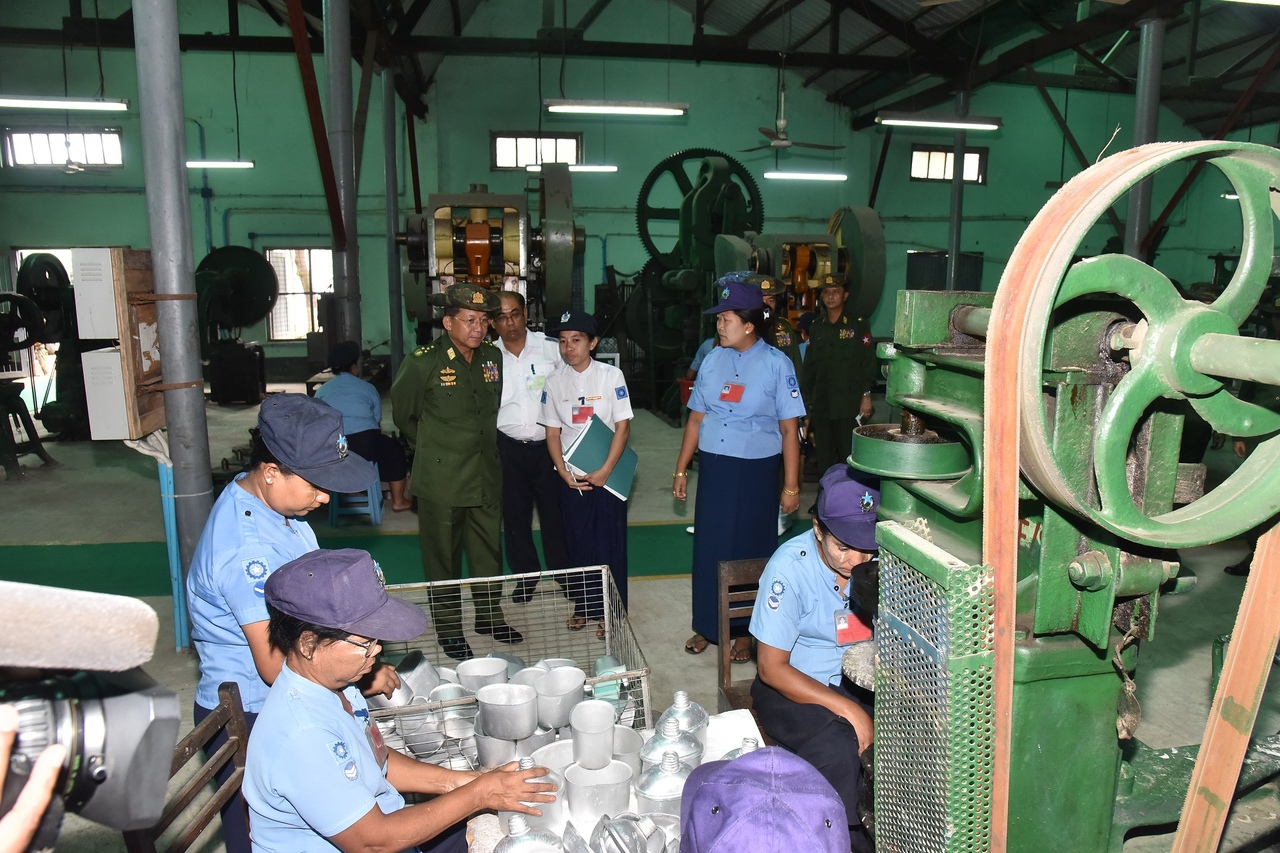 Similarly, the Senior General and party inspected Tyre Factory (Ywama) of Myanmar Economic Corporation in Insein Township,Yangon Region yesterday. At the meeting hall,the factory manager reported on functions of the factory, production and distribution of tyres to markets and plans for export.

In response, the Senior General stressed the need for use of quality raw rubber materials and accessories as the factory aims to produce import-substitute tyres, earning of foreign exchange by selling quality tyres to foreign countries as production line depends on foreign loans and running of the factory to fullest capacity. He then   fulfilled the needs for the welfare, accommodation and meals for the factory staff. 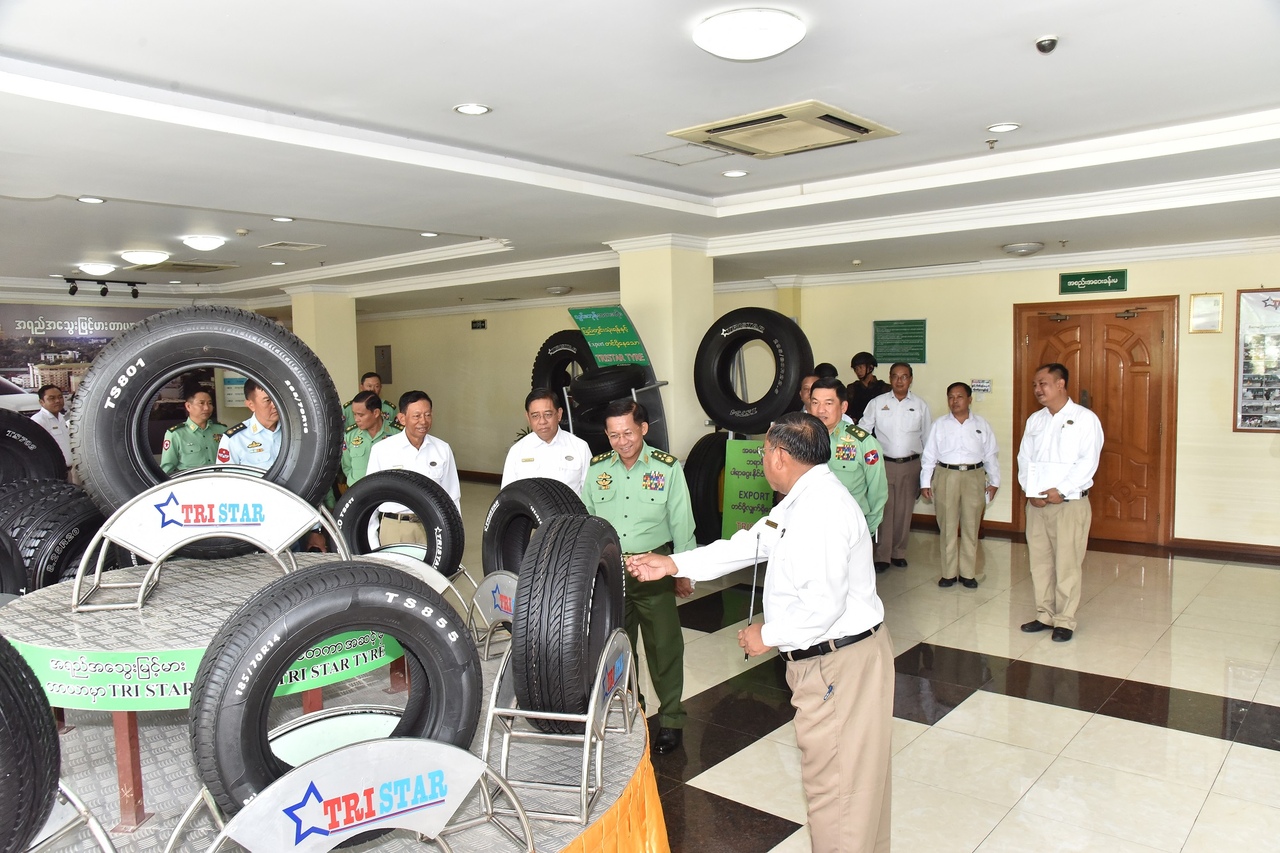 The Senior General and party went to No (3) Steel Factory (Ywama) of Myanmar Economic Corporation. At the briefing hall, the factory manager reported on production and distribution of bolts, nuts and washers to the Senior General, who gave necessary instructions.

After looking round in the factory, the Senior General and party viewed production of bolts, nuts and washers and left necessary instructions over the reports by officials. 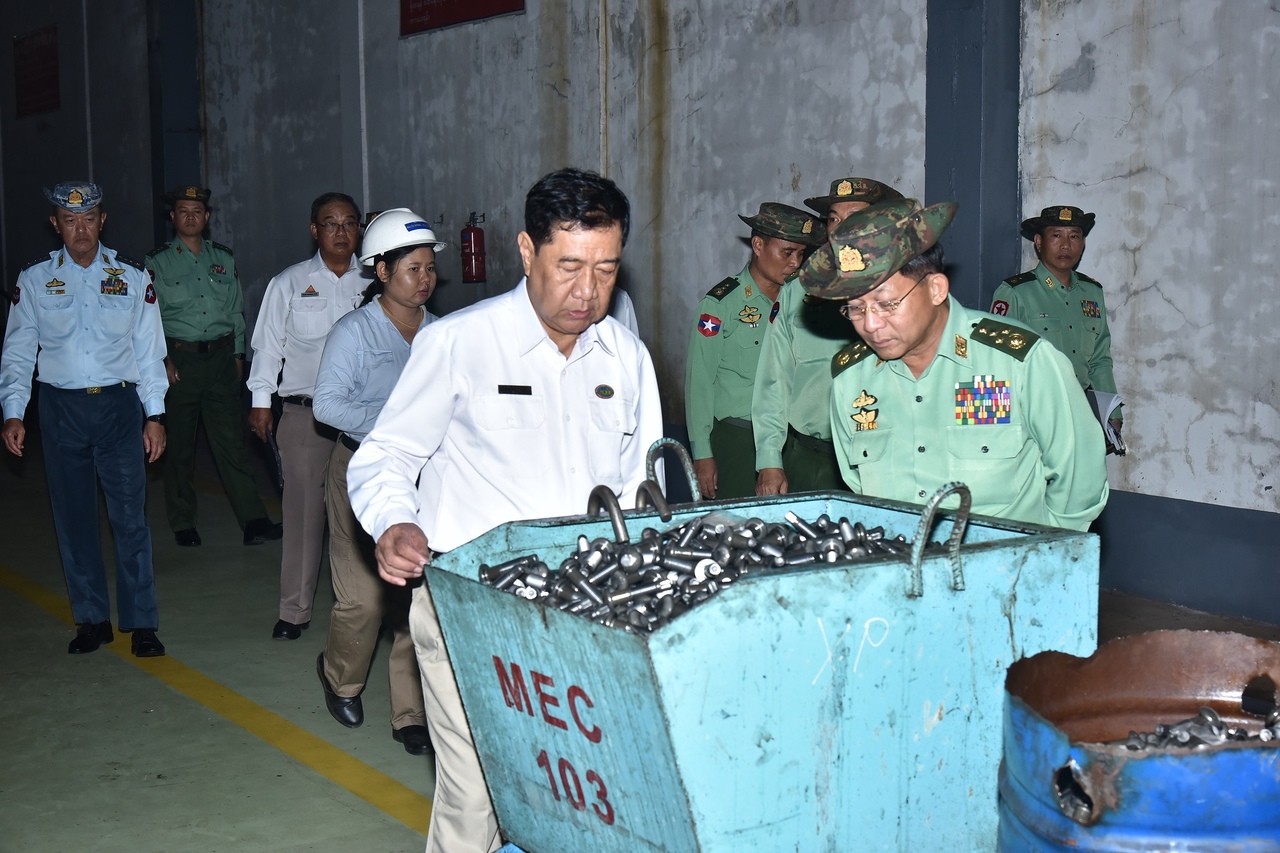 The Senior General and party proceeded to No (3) Agriculture and Livestock Breeding Camp of Yangon Region Command. At the briefing hall, the commander reported on launching of crop plantations under cooling pad system and with hydroponic technology,raising of Hyline layers and DYL pigs,arrangements for fish farming, breeding of dairy cows, distribution of meat, fish,chicken eggs and milk produced from the camp to Tatmadaw families at reduced prices and sale of meat and vegetables to families of Myanmar Police Force, departmental personnel including education staff and local people at cheap prices.

In response to the report, the Senior General called for selling of food surpluses such as meat, fish, eggs and vegetables to local people at cheap prices while trying to distribute products of the camp to Tatmadaw families at cheap prices for their needs. In doing so, he stressed the need to choose and breed fish species that are nutritious and in great demand for public members. 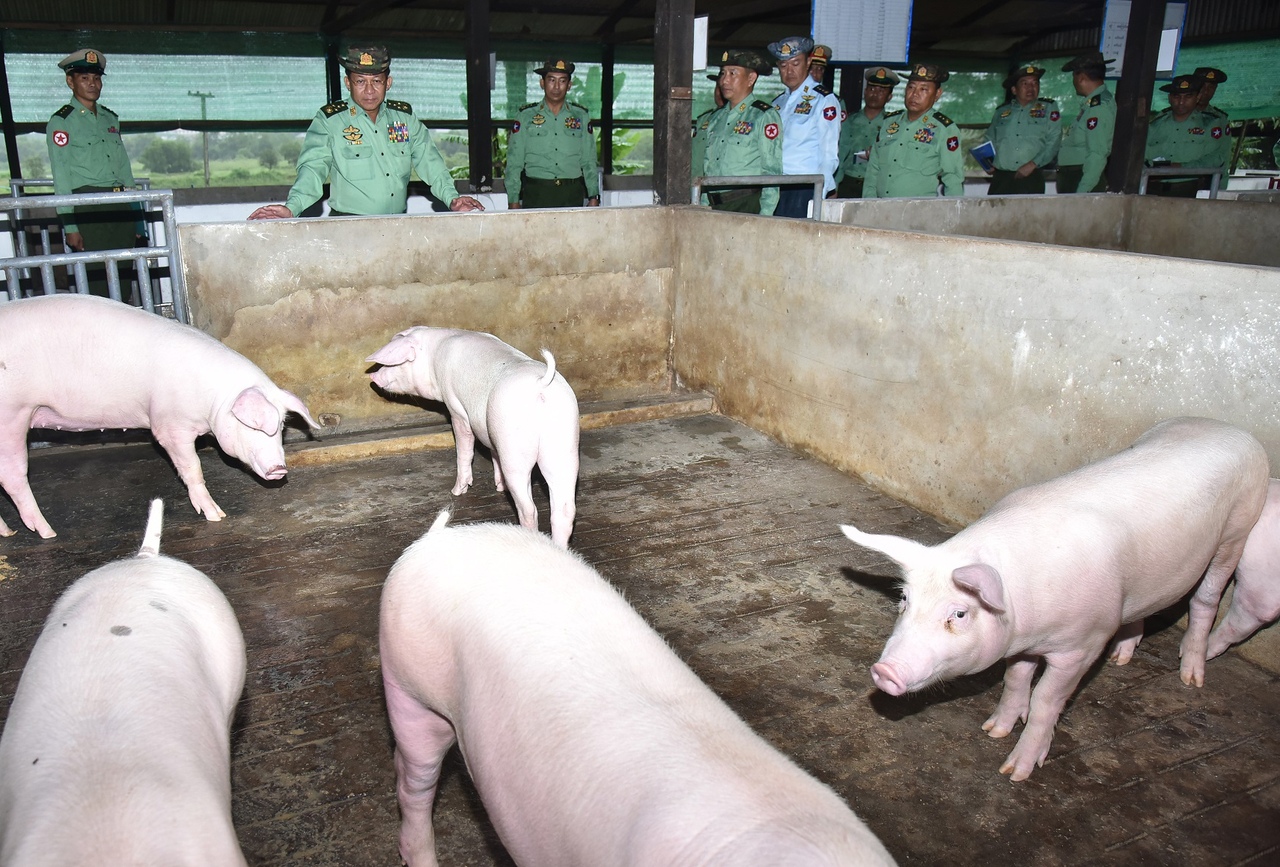 Later, the Senior General and party inspected breeding of fish and DYL pigs and left necessary instructions after hearing reports by officials. 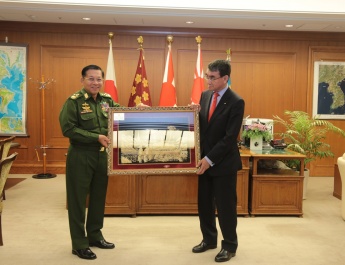 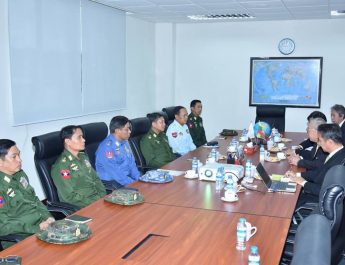 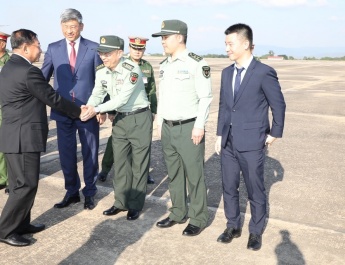